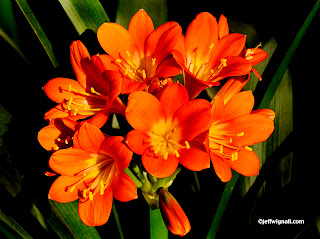 In the last posting I wrote about taking portraits (animal and human) by window light, but today I'm just showing some pretty flowers I also shot by window light (the same window that I shot my cat sitting near in the last post, come to think of it). I went downstairs a few days ago to make tea and one of my orange clivia miniata plants was in full bloom and sitting in a gorgeous pool of sunlight. I really had no intention of taking pictures that day but my philosophy in photography has always been: when you see it, shoot it. So back upstairs to the office I went, grabbed my D90 and ended up shooting the plant for more than an hour. I've known for some time that I needed to begin filling the photo well again for a series of self-published ebooks that I'm writing and these are among the first shots. (And by the way, after more than 20 books published by commercial publishers, I'm not longer writing for any of them--I've begun my own publishing company. And I'll write more about that decision soon, but suffice to say I've been screwed by publishers long enough: let them write their own books from now on.)

As the sun set the puddle of light was moving, so every few minutes I had to tug the plant back into the light. I did a lot of experimenting too: I shot with both 18-70mm Nikkor and 70-300mm Nikkor lenses and I also played with using flash fill. The flash was a bit overpowering at first, but I wanted to fill some light shadows created by parts of the blossom so I set the flash compensation to -2 stops and that way I was able to use flash to fill those shadows, but the sunlight remained the dominant lighting source. There is, however, no flash in this particular frame--I just aimed the flower into the light. Also, since I shot in both RAW and JPEG simultaneously (uses up a lot of card space, but nice to have both formats automatically) I just set the white balance to auto, knowing that I could adjust it in the RAW file later wherever I wanted it. As it turned out the JPEG was fine and was plenty warm just from the light of the sun, not to mention the orange color of the flower. I didn't use a tripod, which is extremely rare for me, because I was shooting from a couch (my kind of photography) and was able to rest the camera on the arm of the couch.

Photo Notes: The photo was shot with a Nikon D90 dSLR with an 18-70mm Nikkor lens. Exposure, recorded in both RAW and JPEG simultaneously, was 1/200 second at f/8, handheld. There were no adjustments made to the image other than a slight sharpening using the unsharp mask in Photoshop. I used Kenko extension tubes to get closer to the flowers.
Posted by Jeff Wignall at 1:15 PM 2 comments: Links to this post 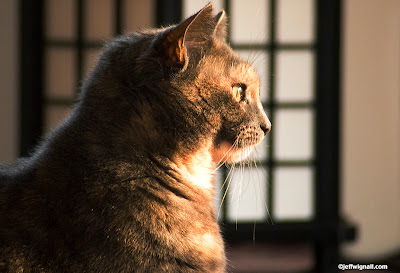 Windows provide a beautiful light for portraits and by choosing the side of the house that you’re shooting on, you can actually vary the quality and color of the light that you’re using. North-facing windows, for example, produce a gentle even lighting, though the color tends to be on the cool side much of the year. East and west windows provide gentle warm light early and late in the day (respectively) and for much of the day any windows facing south will provide a relatively strong and warm light. In this photo my cat is facing west and watching the sunset and so her face is filled with a very pretty warm light (and she really does watch the sunset most days which is one of the reasons I love cats so much--they get the mystery of it all!).
With the exception of light from north-facing windows, however, light coming in through a window can get quite bold and contrasty. One way to handle this contrast issue is to have your subject face the window (the cat chose that position on her own) and then shoot them either from profile or, if you have room to maneuver, by getting slightly in front of your subject. By doing this you’re turning the window light into a front light and this illuminates the important parts of the face. Alternatively you can sit your subject sideways (so the light is just illumination one side of their face) and then use a sheet of white art board to bounce light back into the shadow side of the face. Just aim the reflector so that it bounces light from the window back toward the dark side of your subject. You can use flash too, of course, but you have to be careful not to let it overpower the window light or you'll lose the drama of having the window be the primary lighting source.
Photo Notes: This photo was shot with a Nikon D90 and a 70-300mm Nikkor zoom and was handheld. Exposure was 1/80 second at f/5.6 and I used a small amount of fill flash with -2 stops of compensation on the fill. My latest book is Exposure Photo Workshop, 2nd edition and it has lots of good info about lighting, lighting direction and using flash.
This is posting #501.
Posted by Jeff Wignall at 2:12 PM 1 comment: Links to this post

The Rare Green Phase of the Pink Flamingo 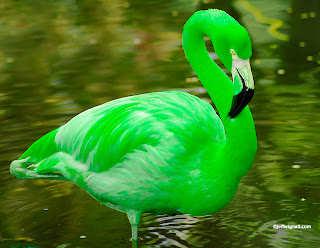 The rare green phase of the pink flamingo. This bird will only shows its green coloring on St. Pat's Day and by the next day has morphed back to its original pink color. It's a stunning thing to see, however, and is said to bring luck to anyone that sees it! And now, of course, you have seen it!

My 500th posting! This is the 500th posting on this blog! I had no idea I'd stick with it for so long. I even published a book based on the blog: Jeff Wignall's Digital Photography Crash Course. I was going to post a photograph of one of my kitties (who has helped me write almost every post) today, but I'll post her for the 501st posting. Today I just had to share this rare ornithological sighting. ;)
Posted by Jeff Wignall at 1:04 PM 3 comments: Links to this post 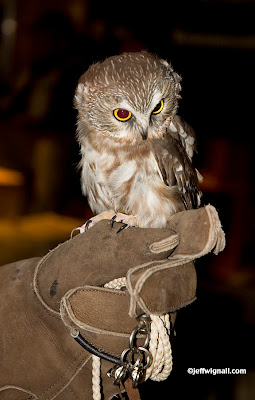 Most photo writers (myself included) tend to dismiss built-in flash as a worthwhile lighting tool, but there are times when it's built-in or no shot and I always prefer to take the picture. There is no question that built-in flash has some limitations in terms of both power and flexibility. Typically it has a range of about 3-12-feet and it only comes from one direction: wherever you're standing. It's also not that easy to diffuse built-in flash, although Lumiquest (who are celebrating their 25th anniversary this month, by the way--see below) makes a useful diffuser called the Soft Screen.

Despite its limitations though, you have to love the convenience of having built-in flash. I shot this little saw whet owl at the Guilford Fair in Guilford, Connecticut this past September and it was pitch black out. From a distance of about three feet, however, I was able to get a perfectly exposed shot of him and, to be honest, I'm just fine with the lighting--it looks quite soft and clean. I'm not sure the shot would look much better if I'd been hauling my big Nikon Speedlight with me--and this was just a fun walk around the fair, so there is no way that I would have had it.

Many dSLR cameras (like my Nikon D90) also offer some nice flash modes to help you improve night and low-light shots. One of the options that I like best is a "slow sync" flash mode that lights the subject perfectly and then leaves the shutter open long enough to pick up some background lighting. Professionals call this technique "dragging" the shutter because the shutter speed drags on after the flash has fired; it's a nice technique for shooting portraits of friends at night where you want the background lighting to show--like on the sidewalk in Times Square. Nice that it's built into a lot of cameras these days. The Night Portrait mode built into most compact cameras does essentially the same thing.

Happy Anniversary to Lumiquest: Lumiquest has been making light modifiers for direct flash for 25 years now. The company was started by Quest Couch (my favorite name in the photo industry) and Heidi Kenny and their first product, the original Pocket Bouncer, is one of the most popular flash modifiers ever made and I'd guess that there isn't a pro working in the world that doesn't have one in their camera bag. I first met Quest and Heidi while working for PDN (Photo District News) soon after they began the company and we've been friends ever since. To me Lumiquest is the quintessential model for turning a great idea into a great company: they saw a niche that needed filling and they created a product that turned into an instant bestseller. Today they make a whole line of great products for flash photography.

Posted by Jeff Wignall at 2:48 PM 2 comments: Links to this post

Look up! The Beauty is in the Details 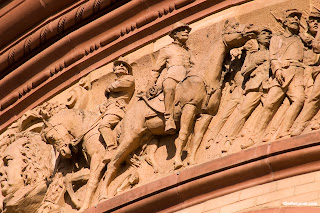 Not much time for writing a new post (still working on two books and daydreaming about a day off!) but wanted to show this photo. It is a detail of the stonework on the facade of the P T Barnum Museum in Bridgeport, Connecticut. Barnum was the mayor of Bridgeport at one time and used to winter his circus there. The building has a lot of neat details including this wrap-around band of carvings that seem to tell snippets of several stories--about the Civil War, the circus, etc. I'll bet people walk by this building every day and never look up to see this cool art. Next time you're walking past an old building, look up: you never know who might be looking down!

Photo notes: Shot with a Nikon D90 and a 70-300mm Nikkor zoom, on a Manfrotto 3021 tripod. Exposure was 1/1000 at f/8--and yes, I still used a tripod even at that speed. Why? So that I could frame it carefully! Captured in RAW and processed in Photoshop.
Posted by Jeff Wignall at 1:18 PM No comments: Links to this post 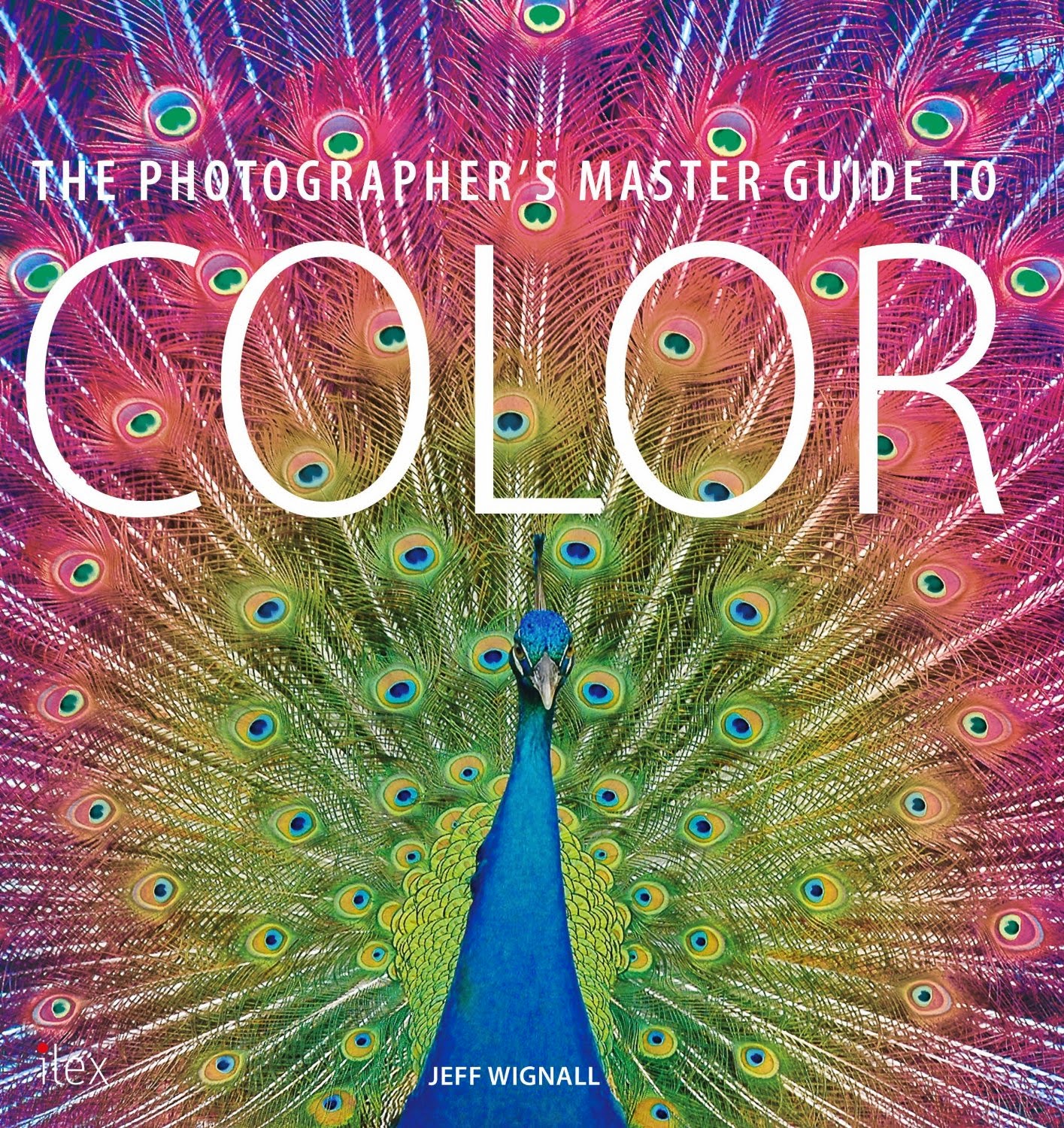 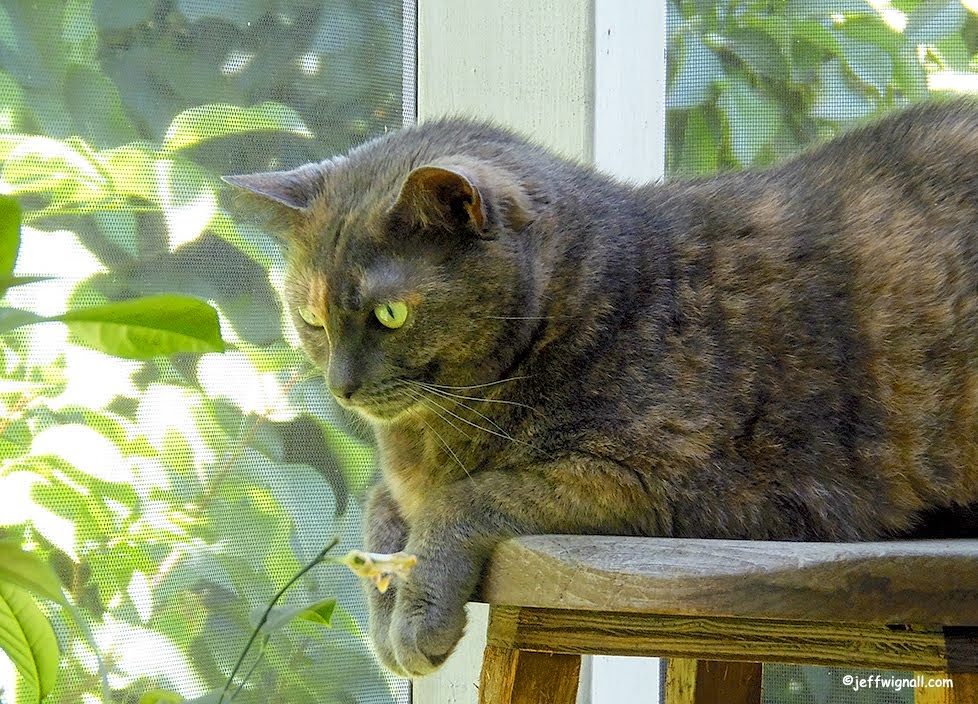